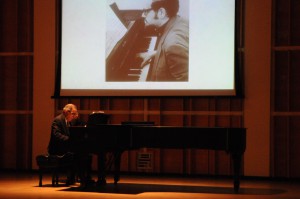 I wrote my first piano sonata as I approached my 18th birthday. My fascination with major/minor effects is clear—and one might say a little bald as presented in the first movement. It moves largely in something of an arrogant jaunt, but there are both a few more mellow moments and on the other hand a very big-gestured two-strand slow peroration at the end. Those who are reminded by that ending of the pre-glacier brass writing that precedes the organ solo in the third movement of Vaughan Williams’s Antarctic Symphony are probably correct. The second movement attempts the serious gestured lento of romantic and neo-romantic music. The third movement is an up-tempo rondo—considerably brighter than the rest. The theme, with many off-the-beat harmonies, has a prior source. As a college student I was asked to write incidental music for a production of Cycle of Spring of Rabindranath Tagore. This was in 1962 and already many felt that using Western music when music of India and the orient was getting some exposure was an error. Further, the drama faculty made an adaptation of the play—likely also miscalculated. Weren’t American college theatre audiences ready for it in a simply translated form from the Bengali original? Anyway, I took the music I wrote for it and made a tone poem for orchestra which has never been performed—but one theme somehow never got into that piece. Thus I used it for the finale of the first sonata. A small chorus of boys sports around to the words “We are out ..on…our…way—we’re not afraid of…a-ny-thing—we are out…on our way…We have no coins to weigh us down.” (Notes by Arnold Rosner)